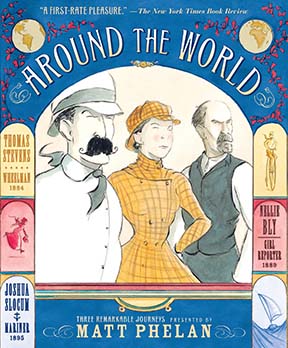 A quiet, thought-provoking graphic novel traces the journeys of three real-life individuals who traveled around the world at the end of the nineteenth century. Like many, they may have been inspired by Jules Verne’s Around the World in Eighty Days , but each singular personality here had his or her own motivating factor for embarking on such an undertaking. In 1884, Thomas Stevens set off on his land journey via bicycle as a means of promoting cycling as more than mere fad. Journalist Nellie Bly set out in 1889, originally as a publicity gimmick to improve newspaper sales; ultimately her journey demonstrated that women were as capable and adventurous as men. Joshua Slocum’s 1895 journey was a more personal one. The retired sea captain retraced a journey he had taken a few years earlier with his wife, who had died on the voyage (a story recounted in gold-toned flashbacks). Haunted by her death and disturbed by hallucinations of other seafaring men, from Christopher Columbus to pirates, his journey is by far the most complex one depicted in Matt Phelan’s ambitious work as Slocum travels across the seas, and through grief and despair. There’s a lot here for teen readers who take the time to travel along, and who will see the contrasts among the three extraordinary voyages. ©2011 Cooperative Children's Book Center