Above the Rim: How Elgin Baylor Changed Basketball 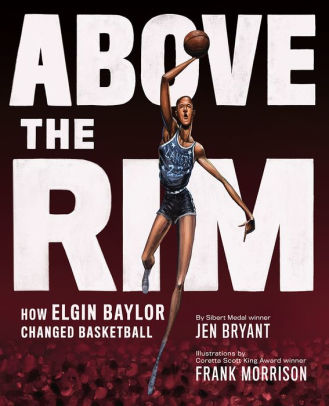 Elgin Baylor faced racial barriers for most of his life, starting with the segregated playgrounds of his Washington, D.C. childhood. But playing street ball with a makeshift hoop in his neighborhood, Baylor first developed the skill he was known for—the ability to jump so high and hang above the rim that he could easily drop the ball through the hoop. Nicknamed “Rabbit” for his jumping ability, he won a college scholarship and was then drafted by the Minneapolis Lakers. But still he faced the same barriers—not being able to stay in a segregated hotel with his white teammates and having to eat cold food in his room while the others ate in restaurants. Baylor used his fame for good by refusing to get up off the bench for a pro game until Black players were treated fairly, which quickly led to a new NBA rule that teams would not be allowed to patronize segregated businesses. Bryant gracefully intersperses her account of Baylor’s life and career with other pivotal events in the Civil Rights Movement of the time, repeating the phrase “People stopped what they were doing and watched.” Her repetition of this and other key phrases throughout lends the narrative a poetic sensibility, as do the elongated bodies of Frank Morrison’s striking illustrations. ©2021 Cooperative Children’s Book Center