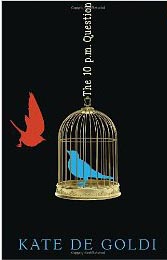 Twelve-year-old Frankie’s friendship with free-spirited Sydney challenges him in numerous ways. Sydney has moved so often that she’s learned to roll with change—like it or not—while Frankie is a worrier for whom routine is comforting and change scary. Honesty is scary too, at least when it comes to telling the truth about his mother. She runs a successful baking business from their home but she hasn’t left the house in nine years. Frankie is the one who makes sure his mom has what she needs every day, and as much as he loves her it’s a burden that adds to his worries and leads to growing resentment toward other family members for the responsibility he carries. Frankie’s also terrified he’ll end up just like his mom some day. It’s a fear he can hardly bear thinking about, but telling anyone is out of the question—no one in his family talks about his mom’s past breakdowns—events Frankie can barely remember—let alone how they’ve been affected by them. Realistically flawed characters and an unusual situation unfold with immense subtlety and grace in Kate De Goldi’s poignant and often funny novel featuring many moments that illuminate things beneath the story’s surface that weren’t visible before. ©2010 Cooperative Children's Book Center