The Day of the Pelican 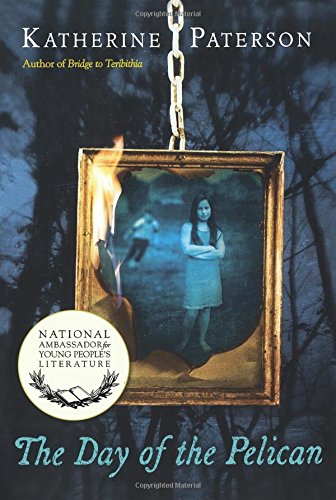 When Meli Lleshi’s teenage brother is arrested and beaten without cause by the Serbian-run government in Kosovo, Meli’s parents decide to move out of the city and back to the family farm. But the Serbs continue their relentless campaign against the Albanian Kosovars, and soon the farm is no longer safe. The Lleshis flee their burning homestead—one family among thousands without safe haven. Katherine Paterson chronicles the rising Serbian government crackdown and ethnic cleansing of Albanian Kosovars through the experiences of the close-knit, extended Lleshi family in this novel rivetingly grounded in Meli’s perspective. The swift way her life changes, the struggles her family endures, and especially their fierce attempts to stick together are memorably revealed in a narrative pierced by small, affecting details and emotionally weighted moments. Meli and her immediate family eventual journey from a refugee camp to the United States. It marks a hopeful new beginning, but the events of 9/11 condemn them again in some people’s eyes because of their religion. A more definitive timeframe for this story set in the late 1990s, and a bit more introductory information, would have been helpful, but a lengthy author’s note fills in some gaps essential to understanding the political context of this affecting and important story. ©2009 Cooperative Children's Book Center