Clap When You Land 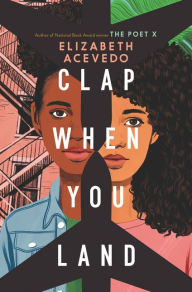 Camino Rios lives in the Dominican Republic with her aunt; her mother is dead and her father, who lives in the United States, visits for three months every summer. Yahaira Rio lives in New York City with her father and mother; her dad travels to the Dominican Republic for three months every summer to visit family. Just months apart in age, neither knows about the other until the plane carrying their father crashes. Each is stunned by his sudden death and the revelation she has a sister. Their grief is further complicated by other factors: Camino’s dad paid for her schooling, and she hoped he’d help her move to the United States to pursue her dream of becoming a doctor. He also paid for her safety, and now a young man who trafficks girls and young women is threatening her. Yahaira, who’d barely spoken to her dad since discovering he already had a wife in the Dominican Republic when he married her mom, is struggling with the gulf that had been between them, and her mother’s anger. Their two compelling voices alternate in this novel-in-verse with a riveting emotional arc that illuminates many complexities of family but also shows the sisters’ relationship developing into something deep and lasting. This story gives a glimpse into the anguish of the fall 2001 plane crash that in part inspired it—an event in the headlines briefly before being eclipsed by ongoing coverage of 9/11.  ©2021 Cooperative Children’s Book Center