All That I Can Fix 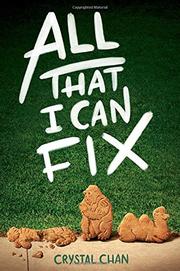 Teenage Ronney’s small Indiana town has been overrun by wild animals released from a private zoo, the owner’s last act before committing suicide by gun. Ten- year-old Sam, a friend of Ronney’s little sister, Mina, is convinced Ronney can find his older brother, who ran away. Ronney is worried about Sam, worried about Mina, and worried about his stressed out mom. He also feels betrayed, and heartbroken, when he learns his two best friends are dating (they all know he has a crush on one of them). Above all, Ronney is uncompromisingly angry at his dad, who’s battling depression and recovering from a self-inflicted gunshot wound in a suicide attempt months before. This compelling, ambitious novel has just the right touch of the absurd to balance its serious themes. Some of the dangers and complexities of guns in society continue to play out as townspeople arm themselves against the animals, with some animals—and some people— proving more dangerous than others. Mixed-race Ronney’s specific heritage is intentionally never revealed. His experience as a brown-skinned teen is that people want to categorize him, and do judge him. He is an irresistible force at the center of this story, caring with each beat of his huge heart, despite every claim he makes to the contrary. ©2019 Cooperative Children’s Book Center