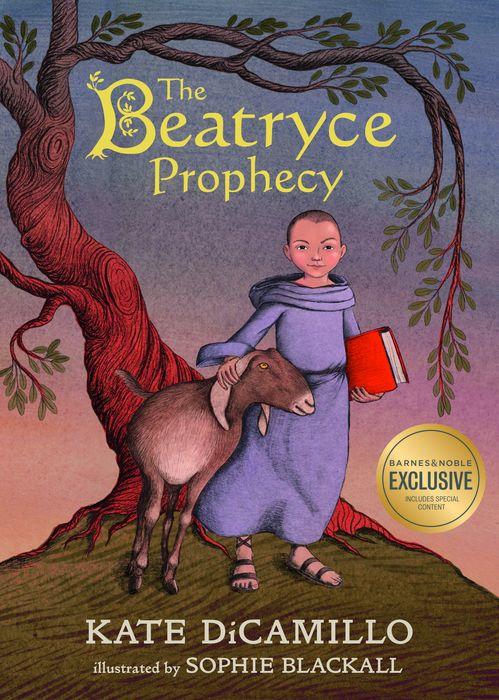 A masterfully crafted story set in medieval times begins with a girl named Beatryce, who can’t remember anything about her past except her name. Brother Edik finds Beatryce in the monastery stable and convinces his fellow monks to harbor her. Although disguised as a novice monk, Beatryce puts the monastery in danger as a girl who can read and write. In a nearby village is an orphan named Jack Dory, bent on revenge against the robber who killed his parents. When Jack Dory arrvives at the monastery to find a monk to take a dying soldier’s confession, the head monk sends Beatryce—and a disagreeable goat named Answelica that’s devoted to her—instructing Jack not to bring them back. Shortly after, Brother Edik comes upon a prophecy about a girl who will bring down a king and realizes it must be Beatryce. Soon they’re all on the run from soldiers who murdered Beatryce’s family at the king’s request, events that begin to come back to Beatryce. They’re helped by Cannoc, a sage who has secrets of his own. Smart and spirited, fierce and tender Beatryce; Jack, whose ache for revenge can’t quell his goodness; kind and gentle Brother Edik, with his quiet courage; and equally kind but fiercely capable Cannoc, who rejected the mantle of power, are such captivating, complicated characters, all white, who are navigating loss and sustained by love. Writing that sparkles with wit and is a pleasure to read, along with beautiful design and illustrations, make for a richly satisfying tale. ©2022 Cooperative Children’s Book Center