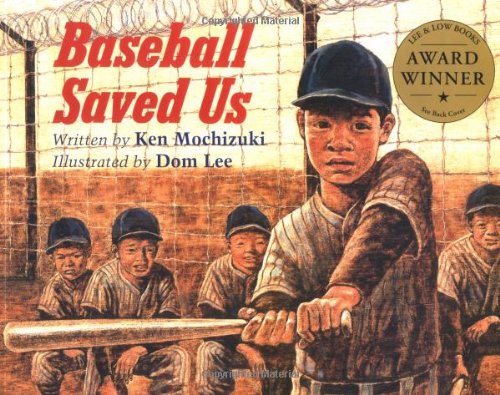 (Note: The CCBC recommended the original edition of this book, published in 1993. The bibliographic citation here is for the 2018 reissue.) The treatment of Japanese Americans during World War II is the subject of this remarkable first picture book. "Shorty," a young Japanese American boy, has a hard time understanding why he and his family had to move out of their house and into a camp in the desert. "We weren't in a camp that was fun, like summer camp. Ours was in the middle of nowhere, and we were behind a barbed-wire fence. Soldiers with guns made sure we stayed there." Everything at camp is different - and more difficult - than life back home: there are dust storms, the buildings have no privacy (even for going to the bathroom) and there is nothing for anyone to do. The day the Shorty's dad decides they need a baseball diamond marks a turning point in camp life as, first building the field and later competing in the games themselves, adults and children finally have something to hope and work for. Shorty, who has never been good at baseball, practices hard and eventually makes a game-winning hit in the camp championship. "But it wasn't as if everything was all fixed." Returning home after the war, he finds that he still must persevere against prejudice and his own fears to succeed. The straightforward narrative movingly captures a young boy's bewilderment over events which make no logical sense to adults, let alone to children. Sepia-toned color illustrations by Lee evoke a sense of a past that is washed in sadness. ©1993 Cooperative Children's Book Center