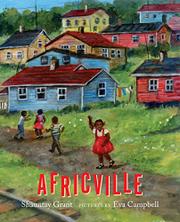 For over 150 years, from the late 1700s to the 1960s, Africville, an endnote with photographs explains, was a Black community in Halifax, Nova Scotia. Its residents, including Black loyalists to the crown, individuals who escaped slavery in the United States, and their descendants, were tight-knit, building a strong community despite lack of outside support and essential services. Africville was demolished by Halifax in the 1960s. In the 1980s the first reunion was held, and in 2002 it was declared a National Historic Site of Canada; an apology from the city government for its destruction followed, and a replica of the church was built, now serving as a museum. This informative note provides fascinating context, while the spare, lyrical picture-book text that precedes it is a moving, detail-rich ode to place and people, community and resilience. The richly textured paintings that serve as the backdrop provide visual context in the form of a reunion—scenes that, like the narrative details, are full of relatable moments for children. ©2019 Cooperative Children’s Book Center