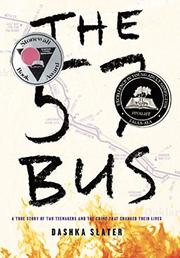 Despite recently losing a friend to gun violence, African American Richard is focused on improving his grades and graduating from his Oakland high school. Sasha, who attends private school, is agender and brilliant, the type of person who invents languages for fun. On November 4, 2013, as Richard and Sasha ride the bus home from their respective schools, Richard holds a lighter to Sasha’s skirt, which erupts into flames. This event sets in motion a long, painful process of court appearances for Richard, and healing for both. The two teens are treated with respect and empathy in this nonfiction account that begins with an exploration of their backgrounds, including Sasha’s gradual understanding that they don’t identify as either male or female, and continues through Sasha’s recovery and Richard’s sentencing. Accessible descriptions of aspects of the U.S. and California justice systems—the practice of restorative justice and California’s Proposition 21, which allows juvenile offenders to be charged as adults—in addition to information about Richard’s personality and adolescent brains and behavior, suggest that, as Richard’s friend attests, the crime “was like a funny prank-joke turns to something that ends your whole life.” Although a grim event begins this narrative, the humanity of both teens and their families is palpable throughout. ©2017 Cooperative Children's Book Center