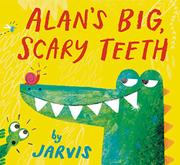 Alan the alligator has built his jungle reputation on scaring the other animals. “It was what he did best.” A snoutful of pointy teeth play a big role in Alan’s frightful credibility, and he is careful to guard the secret that his teeth are, in fact, dentures. But Barry the Beaver learns the truth and absconds with the detachable chompers. When Alan’s attempts at toothless scaring are a failure, he vents his loss of self-identity with loud and miserable tears, prompting the other creatures to offer to return his dentures. There’s one condition: Alan has to agree to stop scaring them. It turns out those big teeth have other uses, and Alan reinvents himself as a gardener, hairdresser, dentist, and scary storyteller. Despite the menacing dentition, Alan is nonthreatening from the get-go, depicted in rich jungle hues rendered with pencil, chalk, and paint and colored digitally, in illustrations bouncing with playful energy. Honor Book, 2017 Charlotte Zolotow Award ©2017 Cooperative Children’s Book Center