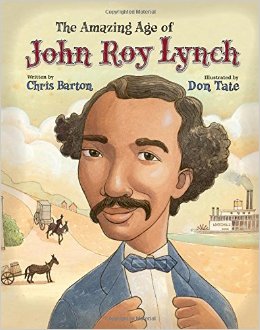 John Roy Lynch escaped enslavement at age 16 during the Civil War. He found a job, went to school, and, in the war’s aftermath, got involved in Mississippi politics before he was even old enough to vote. He went on to be among the first Black public servants in Mississippi, serving as a justice of the peace and then in the U.S. Congress. This picture book about this notable man is notable, too, for its honesty about racism. For example, Lynch’s father was a white Irish overseer who wanted to liberate Lynch’s mother and their children. They would still “belong” to him, the text notes, and “while he may have loved these slaves, he most likely took the whip to others.” Regarding the rising violence against Blacks during Reconstruction, author Barton writes, “white terrorists burned black schools and black churches.” A narrative that ends with a quote from Lynch’s passionate speech in the House of Representatives about the shortcomings and potential of America also includes a historical note and timeline as well as notes from the author and illustrator about presenting this information for children. ©2015 Cooperative Children's Book Center