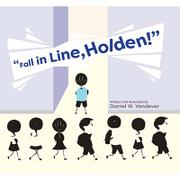 “As class ends and recess begins, we all fall in line.” All except Holden. The rhyming narrative here creates a sense of rigidity and conformity, and the repetition of the phrase “We all fall in line” has an almost musical feel. The breaks in the rhyming with the repeated command to “Fall in line, Holden!” are not just respite from the structure but a reminder of the risk of breaking free. The rewards are shown in the art, which reveals what Holden’s vivid imagination sees: pictures on the walls become animals breaking free, the janitors a circus act, gym class gladiators in battle, the computer lab a space for exploration … or is that exploration in space? Navajo author/illustrator Vandever’s stylized art shows Holden as a Native child, and for most of the book Holden’s blue shirt is the only color on the black-and-white characters. But Holden’s classmates eventually begin to embrace nonconformity and creativity, as evidenced by the later color added to their clothes and faces. A map of the school at story’s end allows readers to follow Holden’s literal and imaginative journey, while the opening refrain of the story alludes to residential schools Native children were forced to attend for generations, a history further examined in the author’s note. But Holden and his classmates are very much contemporary children. ©2017 Cooperative Children's Book Center