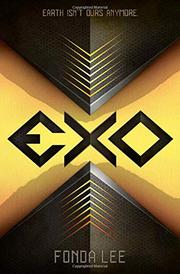 Teenage Donovan is a member of the security forces keeping the peace after years of war that followed the invasion of Earth by the Mur zhree. Although the war has ended, an active human resistance remains. “Hardened” with zhree biotechnology as a child, Donovan can activate a protective exoskeleton, but it can’t prevent him being kidnapped by the Sapience resistance when a raid goes awry. When the resistance learns Donovan is the son of the Prime Liaison—his father is the highest ranking human in their district and works closely with zhree leaders—he’s taken to a Sapience hideout as a pawn. Although Donovan has personal issues with his demanding father he’s loyal to the zhree and, especially, his fellow security officers. But the identity of the principal Sapience propaganda writer turns everything upside down: It’s turns out to be his mother, who left when he was six. She couldn’t save Donovan from the Hardening his father volunteered him for and she believes it means Donovan isn’t really human anymore, even as Donovan knows it’s his humanity that makes him feel so conflicted upon seeing her—both hungry for and resistant to her love. A fast-paced, compelling work of science fiction with strong world-building deftly addresses the logistical and emotional complexities of political conflict and change through intriguing characters—human and nonhuman alike. ©2017 Cooperative Children’s Book Center