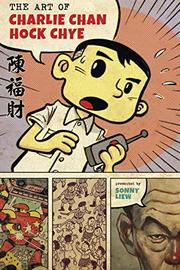 This sophisticated graphic novel is a biography of Singapore comics artist Charlie Chan Hock Chye. He came into maturity and tried to make a career during political upheaval in Singapore as it became independent from Britain, joined a Malay Federation, and later broke away. Tensions between communists and the anti-communists all play out as Charlie tries to succeed as a comics artist, with more and more of his work serving as political commentary. Charlie never made it big in Singapore—too many factors, including costs and competition from big-name comics like Marvel—got in his way, preventing him from providing for his aging parents as he might have. Liew inserts himself as a character to explain some of the political complexities or refer readers to the extensive notes in the back. Copious excerpts and examples of Hock Chye’s work—from posters to strips to ongoing series like “Singapore Inks,” about an office supply store and its leadership, a commentary on the Singapore government—are part of the visual narrative. The complexity and quality of this work is astonishing. Even moreso is what is stated only in a short note on the copyright page: this is a work of fiction. The story of Singapore history in the mid-to-late 20th century as presented here is real; Charlie Chan Hock Chye is not. ©2016 Cooperative Children's Book Center