Tommy: The Gun that Changed America 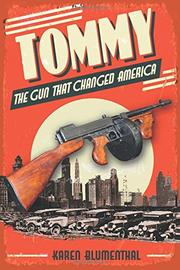 The Tommy gun was developed during World War I, but the prototype was finalized and mass-produced too late to make an impact. The war ended and the manufacturer looked for other markets. It became the favored choice of gangsters, its firing power leading to bloody scenes in Prohibition gang wars in Chicago, and spread from there. The pursuit of criminals like John Dillinger and others that fueled the career of J. Edgar Hoover also fueled new regulations, most notably the National Firearms Act, and the rise of a lobbying arm of the National Rifle Association. At the same time, the U.S. government started a campaign in Hollywood to make G-men, and not gangsters, movie heroes. As our country struggles today with disagreements over guns and gun legislation, this fascinating accounting is highly relevant, even noting that in their first arguments before Congress opposing new regulatory legislation requiring firearm registration, NRA representatives never mentioned the Second Amendment. Occasional black-and white photos, a bibliography, and notes round out this timely work. ©2015 Cooperative Children's Book Center