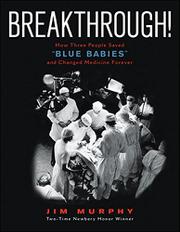 “Blue baby syndrome” was the result of a heart condition known as tetralogy of Fallot that led to insufficient oxygen in the blood. Before late 1944, treatment was limited, and ultimately unsuccessful: children eventually died. Lifechanging, lifesaving measures to treat blue baby syndrome were first realized at Johns Hopkins University in 1944 thanks to the work of three individuals. Dr. Helen Taussig was a compassionate care provider desperate to save her young patients. Dr. Alfred Blalock was a driven researcher and surgeon. Vivien Thomas’s official title was lab assistant to Blalock, but this brilliant African American technician was the one who developed and perfected the surgical procedures that would save children’s lives. Jim Murphy weaves together profiles of all three into the story of this breakthrough medical treatment. The sexism faced by Taussig as a woman in medicine is a topic of her story, while the racism faced by Thomas is a running theme throughout this account that ends describing the due recognition he eventually received. ©2015 Cooperative Children's Book Center