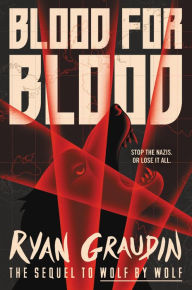 A sequel to last year’s Wolf by Wolf, an alternate history in which Germany and Japan were the victors of World War II, shifts among various perspectives but focuses primarily on Yael, Luka Lowe, and Felix Wolf in the aftermath of Yael’s failed assassination attempt on Adolf Hitler. Yael, Luka, and Felix make a dramatic escape from the Germans and are moving across Eastern Europe. Theirs is an uneasy alliance, shadowed by potential treachery. Like the prior volume, this one moves back and forth in time, illuminating moments from the past in each of their lives that shaped their outlook and current motivation. For Felix, that motivation is doing whatever necessary to protect his family. For Luka, somewhat to his surprise, it’s doing whatever is necessary to prove his allegiance to this stranger, Yael, who has been posing as his former lover, Adele Wolf. And for Yael, haunted by her childhood in a Nazi concentration camp from which she escaped, it’s doing whatever is necessary to salvage her mission and save friends in the Resistance who are in danger because of its failure. Tense and terrifically plotted, fans of the first book will be more than satisfied by this conclusion. ©2016 Cooperative Children's Book Center