A Prince without a Kingdom 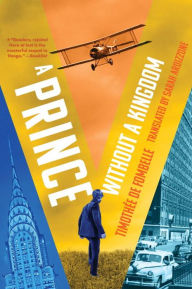 The sequel to Vango: Between Earth and Sky continues with the same breathtaking speed and intricacy as it follows Vango through World War II Europe and New York City. Vango knows he is being pursued for a murder he didn’t commit, but far more dangerous are the forces trying to kill him for reasons he cannot fathom. They have emerged from a past he knows nothing of. The truth of that past is revealed in chapters that compellingly weave Vango’s fictional existence into historical events. Mystery and intrigue, heroes and villains, poignancy and impossibility exist side by side in a novel that follows multiple characters and storylines. Politics and war, power and evil, and the ongoing quest for peace are all threaded through the story. At the center of it all is Vango, a young man moving toward a hopeful future, assuming he survives the threats from his unknown past. Exceptional writing and translation make this is a pleasure to read, even as it challenges readers to keep track of all the elements.  ©2015 Cooperative Children's Book Center

Translated by Sarah Ardizzone. Translated from the French