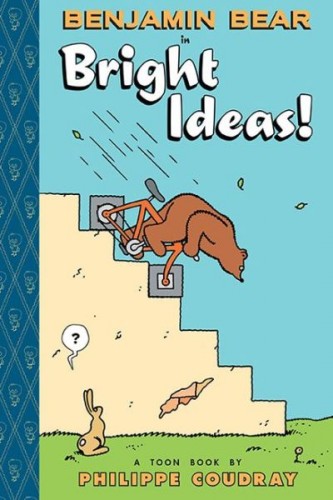 An unusual entry in Toon’s comic series for beginning readers features one-page comic strips, each with a clever visual punchline. For example, Benjamin Bear says to a fish swimming in a bowl, “Let’s go play at your house” and, after dumping the fish in the lake, dons the upside-down fishbowl to wear as a diver’s helmet before entering the lake himself. Or, after seeing his rabbit friend jump over a stream, Benjamin Bear builds a bridge for the rabbit, who proceeds to jump over the bridge. It’s one laugh after another in this engaging easy reader. The humor is simple enough for new readers and sophisticated enough so that older children will enjoy it, too. ©2014 Cooperative Children's Book Center