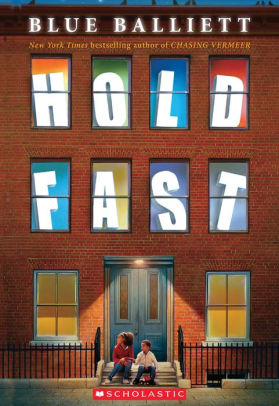 Blue Balliett’s most recent story has a cryptic opening chapter that sets the stage for a mystery with serious undertones. Early’s father, Dash, has disappeared on his way home from work at the Chicago Public Library. It soon becomes clear that Dash’s disappearance is linked to the “extra” work he was doing helping process donated books. Dash thought all was aboveboard, but the police are quick to assume the missing man was involved in a crime. The more Early tries to discover what happened, the clearer it becomes that something criminal was going on without Dash’s knowledge. Smart, observant Early must figure out a way to understand numerical patterns and wordplay in hopes of solving her dad’s disappearance. But this story is also an affecting look at homelessness and the power of dreams. Early, her little brother, and mother end up in a shelter without Dash’s income, and the reality and emotional impact of life without a permanent home are poignantly portrayed through vivid, child-centered details. At the same time, African American Early has been raised in a family of dreamers who believe in aiming high and working hard to achieve what they envision. The Langston Hughes poem “Dreams” is their touchstone, and its message proves transformative. The story’s ending, full of optimism, is not the most realistic dimension of the novel but it’s one to embrace. Because sometimes, it’s the unjaded eyes of a child that can look at old problems in new ways—seeing possibilities rather than barriers, offering hope rather than hopelessness. ©2013 Cooperative Children’s Book Center