Amistad: A Long Road to Freedom 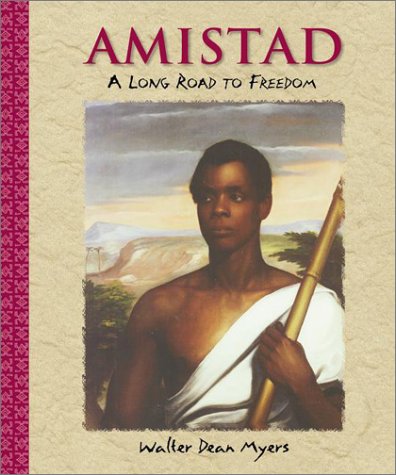 Much has been written about the people who were captured in West Africa and sent as part of the slave trade to Cuba, where a new ruling actually made this inhumane commerce illegal. That is why these Mende people were transferred to a ship called Amistad where their mutiny, subsequent imprisonment in the United States and ultimate court-won "freedom" was so important to American abolitionists in the early 1840s and later. Written accounts vary in their emphases and uses of documents about this complicated history, but all feature a young man, Sengbe Pieh, know to have been a rice farmer in the village of Mani in Mendeland before he lost his freedom. This man came to be known in America as Cinque, and it's Nathaniel Jocelyn's famous portrait of him on the front cover of this most Afrocentric Amistad account. Sengbe's history is documented, which is why he is well known today. The people of the Amistad are known because of the precedent-setting court cases ultimately involving former U.S. president John Quincy Adams and other prominent attorneys and politicians of that time, and because of the final Supreme Court decisions affecting the basic human rights. Myers's point of view is crucial and essential, and he writes with arresting style. There is much archival visual information, and a list of further readings and an index. ©1998 Cooperative Children's Book Center