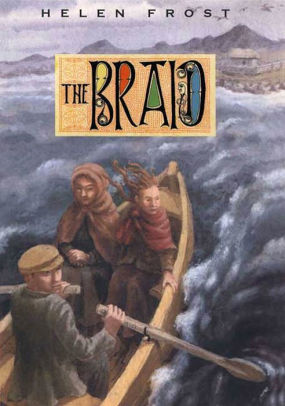 In the middle of the nineteenth century, under the cruelty of English rule, a Scottish family living on an island in the Outer Hebrides is forced to leave their homeland. Helen Frost tells the story of the family’s fate from the perspective of the two oldest sisters: Jeannie accompanies her parents and younger siblings on the journey to Canada while Sarah chooses to stay behind rather than abandon their grandmother. In poems written in the sisters’ alternating voices, Jeannie tells of the harsh crossing, when her father and little sister died; the hard, hard times as she and her mother tried to eke out an existence with her little brother; and gradual pride in their small successes over time. Sarah tells of missing her family, of falling in love, of losing her lover through another cruel act of the English, and of being left, unmarried, with a child. The sisters have no way to communicate directly to one another, but the interconnected poems—woven together in an intricate structure Frost developed, inspired by Celtic knotwork—symbolize the connection of the heart that they share across space and time. Frost’s breathtaking writing is something to behold in and of itself. Here, she once again uses her gift with words to tell a haunting and beautiful story. ©2006 Cooperative Children's Book Center