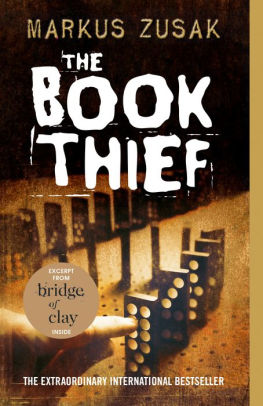 Liesel is a young girl living in foster care in a Munich suburb just before and during World War II. Her younger brother died on the train to their new home. Liesel’s foster mother, Rosa, has a brisk manner and foul mouth but it’s just a way to protect her soft and tender heart. Liesel’s foster father, Hans, has a goodness that is immediate and shining. He teachers Liesel to read, and words—written, read, spoken, and unsaid—become one of the defining forces in Liesel’s life. As the war escalates, Liesel becomes a collaborator in a family secret: a Jewish man named Max is living in their basement. Liesel tells no one about Max, not even her best friend, Rudy, the free-spirited boy next door who has loved Liesel from the moment they met. But she does tell Max about Rudy and her life, brightening his dark basement days and nights with stories; a gift he ultimately returns. Liesel steals books from the library of the mayor’s wife, a woman immersed in grief over the loss of her son in the last war. Liesel’s thievery is a bold, decisive act in a world where much is spinning out of control. Some people in Liesel’s neighborhood are Nazi sympathizers. Others follow all the rules in the futile hope they won’t draw attention to themselves. Many in their town willingly participate in book burning, and many come out to watch the ruthless forced march of Jewish prisoners on the road to Dachau, all but a handful seemingly unmoved. How can human nature be explained? That question haunts the novel’s narrator, Death. He does not pass judgment but is far from unmoved. Liesel’s story, touching so many other lives, reveals everything that human beings are capable of enduring, inflicting, bestowing, and achieving: from sorrow, sadness, and cruelty beyond comprehension to incredible compassion, kindness and joy. It offers both despair and hope for humanity. ©2006 Cooperative Children’s Book Center