Al Capone Does My Shirts 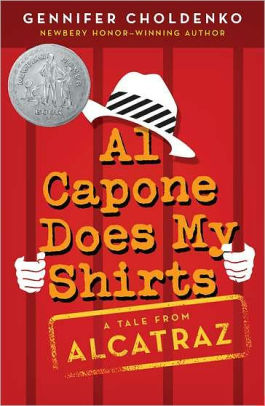 When Moose Flanagan moves to Alcatraz Island so his father can work as a prison guard, he’s concerned about leaving his friends and his baseball team behind. He quickly discovers that living on the same piece of ground that harbors Machine Gun Kelly and Al Capone is a whole new ballgame. Along with the children of the other prison employees, Moose takes a boat to San Francisco each weekday to attend school. There the Island kids milk the mystique of their home for all it’s worth, including an ingenious scheme that involves smuggling their classmates’ dirty clothes into the prison laundry system – for a price. The humor of Moose’s escapades is balanced with a more serious issue his family deals with daily: his older sister Natalie has a condition that keeps her from functioning as a typical teenager. Unidentified in this story set in the 1930’s, it seems likely that today Natalie would be diagnosed as autistic. Desperate to find help for Natalie, Moose’s mother insists that her 16-year-old daughter is only ten, an age when she’s still eligible to attend special schools, rather than being relegated to an institution. A concluding author’s note describes life on Alcatraz during its tenure as a working penitentiary from 1934 to 1963, solidly grounding this piece of fiction within fact. In a similar vein, Ms. Choldenko’s sister served as inspiration for the character of Natalie, who is portrayed with respect and intimacy. The author’s dedication reads, “To my sister, Gina Johnson, and to all of us who loved her – however imperfectly.” ©2004 Cooperative Children's Book Center