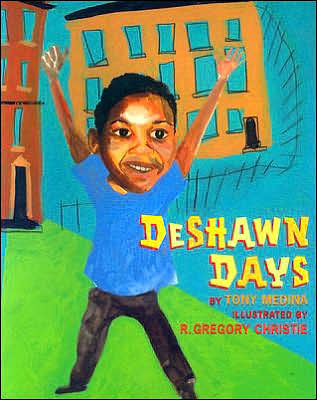 The engaging narrator of this child-centered collection of poems begins with an invitation to readers: "I'm DeShawn Williams / I'm ten years old / come see who I live with– / who I love!" Through poems and pictures, we meet DeShawn's extended family: his mother, grandmother, uncle, aunt, and cousin Tiffany, all of whom live in DeShawn's house in a city neighborhood. DeShawn's observations about his family, friends, school, and neighborhood show the typical concerns of many ten year olds: his grandmother is his confidant ("I could tell her anything / she never tells my secrets") and his cousin Tiffany ("she's ten too / and tall and tough") is both friend and rival. He spends most of his free time playing with Tiffany, his best friend Johnny Tse, and other kids on his block. He loves his neighborhood but hates the ever-present graffiti so much that it gives him nightmares, and his uncle Richie comforts him ("Don't worry DeShawn / it's just words / they can't hurt you"). The violence he sees on the evening news also scares him; when he mentions it to his teacher in a later poem, it inspires a classroom letter-writing project. Overall, DeShawn comes across as a realistic, exuberant, self-assured yet vulnerable child who gets plenty of emotional support from the elders in his family and at school, especially when he must face the death of his beloved grandmother. R. Gregory Christie's exceptionally fine acrylic paintings capture both the physical and emotional nature of DeShawn by using a style that effectively exaggerates heads, hands, and eyes to get right to the heart of the character. ©2001 Cooperative Children's Book Center