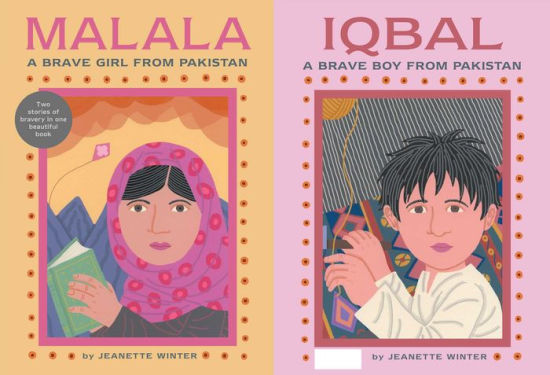 Iqbal Masih was a four-year-old boy in Pakistan in the 1980s when he went to work in a carpet factory, held in bondage because of a twelve-dollar loan his parents couldn’t repay. When he got older and realized he was being forced to work illegally, he began fighting, gaining his freedom and then speaking out on behalf of other children until he was shot and killed, at age twelve. Malala Yousafzai was a fifteen-year-old girl in Pakistan in 2012 when she was shot by the Taliban for advocating for education for girls. She survived, and has become even more outspoken. Jeanette Winter’s spare and moving account of these two inspiring young people a generation apart tells each story separately, starting from either end of the book (which must be flipped over and around halfway through). But the two meet in the middle with a wordless page spread showing both of them. Malala is holding onto the string of a kite, and Iqbal looks to have just let go of one. ©2014 Cooperative Children's Book Center