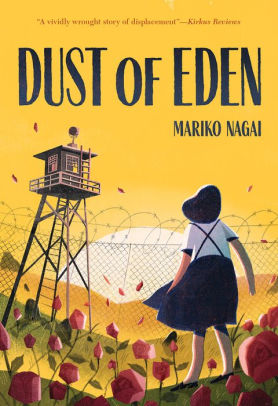 “We held our breath for three / years … We lived behind a barbed wire / fence under a stark blue sky that could break / your heart (as it did break my grandfather’s).” Mina Tagawa and her family are among the thousands of Japanese and Japanese Americans on the west coast of the United States held prisoner by the U.S. government during World War II. Mina’s father is arrested shortly after the bombing of Pearl Harbor, but within a matter of months all west-coast Japanese are targeted. Moving poems in Mina’s voice mine small details of huge events to describe the anguish, the disbelief, the anger, and sadness within and beyond her family. There is also great tension when her father is reunited with them and disagrees fiercely with her older brother, Nick, about whether he should join the U.S. army. Her grandfather, who grows roses in the camp, where it seems roses should not be able to grow, tells her, “You are Masako, / but you are also Mina. / I can’t offer / you an answer, / but your job is / to learn to live / with these two / broken pieces / and to make them one.” ©2014 Cooperative Children's Book Center