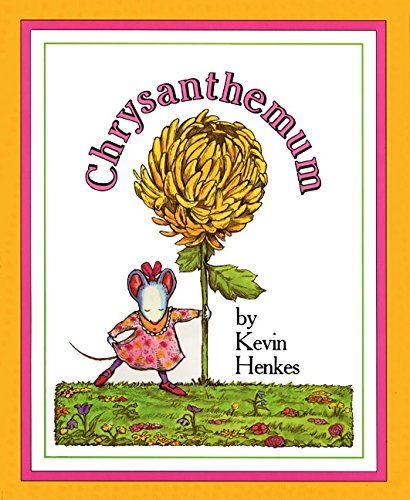 Chrysanthemum has always thought of her name as beautiful and perfect as she herself until her classmates laugh when they hear it during roll call on the first day of school. Mercilessly teased about it in school by Victoria, Rita and Jo, Chrysanthemum begins to hate her name, in spite of assurances from her parents. Strapped for life with an ugly, unwieldy name, her future looks bleak until the much-admired music teacher, Mrs. Twinkle, reveals that she herself is named Delphinium. Suddenly, Victoria, Rita and Jo are asking to be called Marigold, Carnation and Lily of the Valley. Chrysanthemum grows and eventually blooms in a wry, perfectly paced picture story that's as much fun to read aloud as it is to listen to. Watercolor paints and a black pen were used to create the full-color art showing all the characters to be talking mice--a reality one almost forgets due to the observant writing about children. ©1991 Cooperative Children's Book Center

Kevin Henkes grew up in Racine. He received a BA from UW-Madison (1983). He lives in Madison.