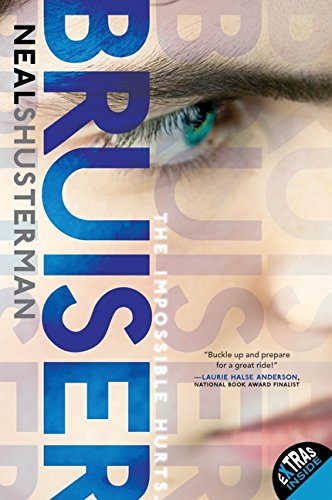 Determined to stop his twin sister, Brontë, from dating the kid known as “Bruiser” at their high school, Tennyson finds himself drawn into Brewster’s life instead. Brewster and his younger brother, Cody, live with their uncle, an odd, angry man who doesn’t like Brewster making friends. After seeing Brewster’s bruised and ravaged back, Tennyson’s sure Brewster is the victim of abuse. It turns out Brewster’s uncle has never hit him, but the truth is more unsettling. Tennyson figures it out slowly: Brewster comes to his lacrosse game and Tennyson plays without pain. Brontë twists her ankle but Brewster is the one limping. Brewster comes to their house and the suppressed rage between Tennyson and Brontë’s parents, whose relationship has been on the brink of implosion, dissipates, along with the twins’ own sadness and uncertainty about their family. Despite Brewster’s obvious suffering, Tennyson finds the feeling of well-being addictive, and it’s not long before he’s unwilling to live without it. Neal Shusterman’s tense and masterful novel is told in sections alternating between Tennyson, Brontë, Brewster, and Cody’s voices. Through the sharply funny and observant narratives of Tennyson and Brontë, Brewster’s spare torment, and Cody’s innocent wisdom, Shusterman explores human nature in a fascinating and ultimately transcendent story. (MS) ©2010 Cooperative Children’s Book Center