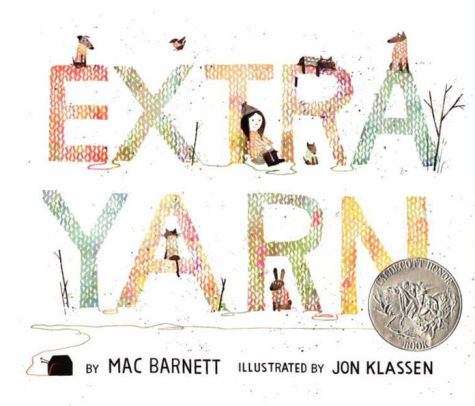 An original tale begins with a little girl named Annabelle finding a box of magic yarn that never runs out. She knits sweaters for everyone she knows, and then she knits “sweaters for things that didn’t even wear sweaters.” Soon everything in her once dismal town, from bare winter trees to houses and cars, wears a nubbly coat of color. Word spreads and it isn’t long before an archduke arrives, wanting to buy the box of yarn. Annabelle politely declines. So the archduke steals it. But when he gets back home and opens the box, it’s empty. “You will never be happy again!” he curses, thinking of Annabelle as he throws the box out his castle window. But it’s a magic box, and it knows exactly to whom it belongs. Mac Barnett’s whimsical, wonderfully paced story spins its own kind of magic, leaving plenty of room for children to decide on an explanation. Barnett’s folkloric outing is paired with masterfully understated illustrations by Jon Klassen—even the colors of the yarn are muted, although still a striking contrast to the shades of gray that defined Annabelle’s town before the box’s arrival. ©2013 Cooperative Children's Book Center