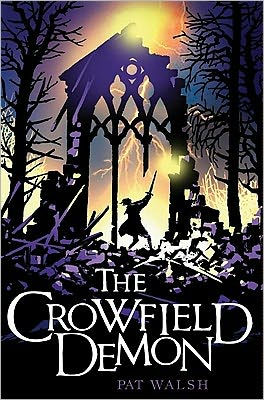 Picking up two years after the events of The Crowfield Curse (Chicken House / Scholastic, 2010), orphaned teen Will continues to live with a small group of monks in a monastery. His life in England in the mid-1300s is grim, with plenty of hard work, bad food, and a cantankerous prior, but Will is content with the company of kind Brother Snail, Shadlok the fay, and especially the hobgoblin, Brother Walter. The monks’ abbey is disintegrating, and a stone mason declares that there’s more behind the damage than normal wear and tear. A demon is systematically demolishing the structure, and his success is linked to an artifact that Will discovers buried beneath the tile floor. Destroying the artifact would impede the demon’s efforts, but that’s only possible with magical assistance, which the prior refuses to condone. After a cataclysmic night forces the prior to relent, Will, Brother Snail, and Shadlok join forces to defeat the demon, only to discover that they also must face another foe with an evil agenda. Medieval magic and superstition juxtaposed with Christianity create a fascinating conflict, while the imaginative plot unveiled in the first book continues to unfold. ©2012 Cooperative Children's Book Center