Froi of the Exiles (The Lumatere Chronicles) 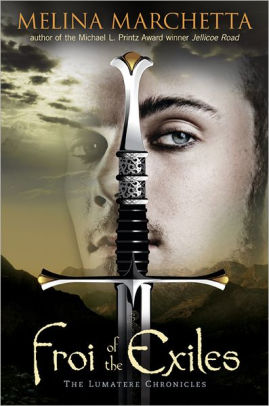 Froi, who knows nothing about his origins, has lived in Lumatere since being given refuge there by Queen Isaboe. When Charyn rebels arrive and convince Froi to assassinate the cruel Charyn king—the man behind so much of the horror from which Lumatere is still recovering—Froi travels to Charyn posing as a potential consort for the king’s daughter, Quintana. It turns out Froi isn’t the only one in the palace intent on killing the king. Gargarin, Froi’s crippled guide, is also out for murder. In the chaos following the successful assassination, Froi discovers truths about his past no less unsettling than the realization that he is falling in love with Quintana. Her mind has fractured into multiple personalities after years of abuse and emotional neglect, but it is also sharp and fierce, piercing Froi with tenderness. Meanwhile, back in Lumatere, Lucien of the Monts is dealing with Charyn refugees in his valley and with Phaedra, the Charyn wife he rejected, who is determined to comfort her people. In this sequel to Finnikin of the Rock (U.S. edition: Candlewick Press, 2010), Melina Marchetta has penned another rich, labyrinthine tale featuring characters of exceptional complexity, including a number of strong, fascinating women. The realities of war and the ways of the power-hungry are revealed and condemned in a novel that offers affirmation of the dignity that all people deserve in both life and death. ©2012 Cooperative Children’s Book Center