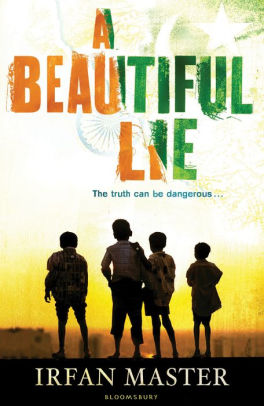 In northern India in 1947, thirteen-year-old Bilal’s father, a man who believes that a united and free India is not only possible but essential, is dying of cancer. When the decision for Partition is finalized, Bilal decides to hide the truth from his father, thinking it will break the man’s heart. That means keeping news and visitors out of the house. His three best friends—Saleem, whose family is Muslim like Bilal’s, Chota, and Manjeet, whose family is Sikh—all willingly help him out. As Bilal and his friends work to keep visitors away, the unraveling of trust within their larger community becomes apparent as former friends and neighbors become further and further divided along religious lines and violence escalates. Bilal’s older brother—rarely around and caught up in separationist fervor—shows up occasionally to encourage Bilal to take their father to the new Pakistan before Partition. But Bilal refuses. Author Irfan Master’s story is told with immediacy and insight into how Partition ripped India apart in a way that was far more profound than just geography in a story that is deeply felt and moving. ©2012 Cooperative Children's Book Center