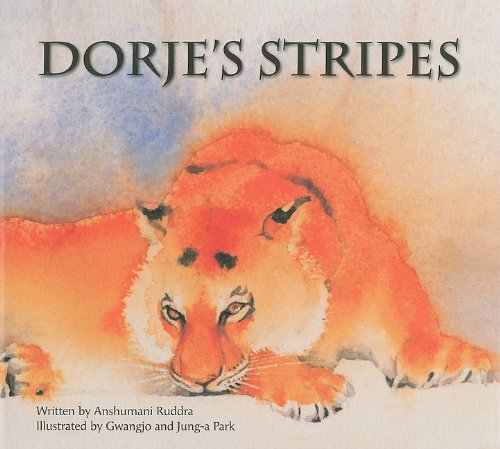 A community of Buddhist monks, young and old, share their Tibetan monastery with a Royal Bengal tiger named Dorje. Master Wu tells the story of the tiger’s arrival at the monastery, and how by entering the animal’s dream he learned why Dorje has no stripes. Once part of a healthy population of tigers in Bengal, Dorje once had a beautifully striped coat. But Dorje began to lose a stripe for each tiger that died at the hands of sport hunters and those collecting hides. When his survival was threatened, Dorje escaped to the sanctuary of the monastery. But the appearance of a new stripe on Dorje heralds hope for the Bengal tigers, and Master Wu later reports seeing a female Royal Bengal tiger in the forest nearby. Lovely watercolor art creates a dreamy feeling for this purposeful tale. A final note states that the book was produced to draw attention to the vulnerable state of the threatened Bengal species, now numbering fewer than 1,500. ©2011 Cooperative Children's Book Center