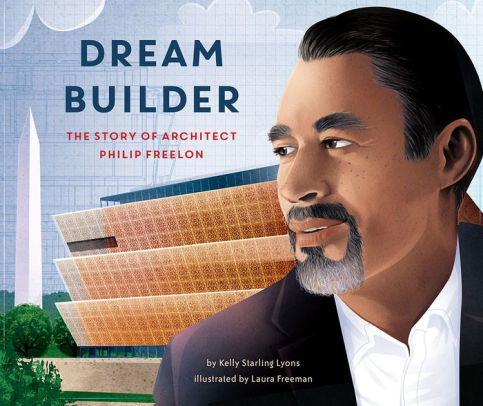 During his Philadelphia childhood, Philip Freelon was part of a family of art appreciators that included his grandfather, a Harlem Renaissance painter. Always creative, Phil sketched, built models, sculpted, and wrote essays and poems. At school he excelled at math and science, but struggled with reading. His businessman father told his son about having to sleep in different Southern hotels than his white colleagues while traveling for work, and other discriminatory and racist incidents. As a college student, Phil read on his own about Black and Islamic architects and builders, subjects absent from his classes at North Carolina’s State University of Architecture. All of these experiences and observations eventually shaped the design focus of his own firm, with its concentration on projects he felt could positively impact the world. Philip Freelon served as lead architect for the National Museum of African American History and Culture, which opened in 2016. This accessible biography celebrates Mr. Freelon’s remarkable career and the integrity and cultural vision at its foundation. ©2021 Cooperative Children’s Book Center