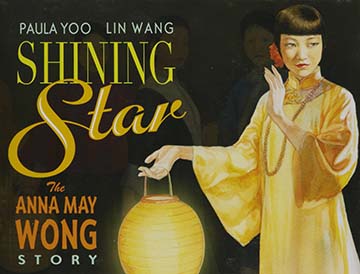 In this picture book biography of early film star Anna May Wong, Paula Yoo focuses on the challenges of working as a Chinese American actress at a time when Asian characters were presented in a racist and stereotyped way in the movies. The censure Wong faced from Chinese and Chinese Americans who felt her roles dishonored her race and culture, and her frustration and heartbreak when racism also denied her a coveted, dignified role, led Anna to rethink her career. After an eye-opening trip to China, she returned to Hollywood and accepted only roles that offered what was then a positive portrayal of Chinese people—in a career that spanned more than fifty films as well as television. Paintings by illustrator Lin Wang provide rich emotional accompaniment to Yoo’s account of Anna May Wong’s early career. In an author’s note, Yoo explains that for decades after her death in 1961, Wong was viewed negatively by many who still saw her portrayal of Asians as stereotypical. Only recently has she begun to receive acknowledgment for the ongoing struggle she waged against discrimination. ©2009 Cooperative Children's Book Center