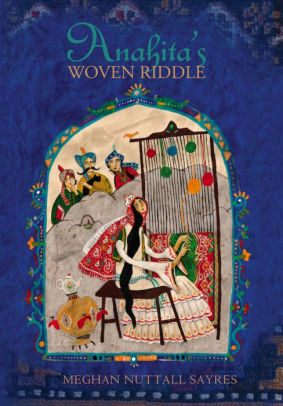 As is the custom in late nineteenth-century Persia, Anahita’s future husband will be chosen by her parents. The offer from a local government official would insure her family’s tribe would have plenty of access to the waterways upon which their nomadic existence depends. But Anahita has little desire to marry, and then only if she can choose her mate. Her real hope is to apprentice to her uncle the dyemaster and help create perfect hues for the weaving that has been the traditional craft in her tribe for centuries. But her father insists she marry, and she counters with a challenge. She proposes a contest: the man whom she will marry must solve the riddle she will weave into her marriage rug. To Anahita’s surprise, she finds herself taking great interest in three of the potential suitors in Megan Nuttall Sayres’s captivating story that is woven with vivid details about Muslim customs and nomadic culture in the Middle East. Persia (now Iran) has a long tradition of beautiful lyric poetry which is also incorporated into this novel about a fiercely proud and independent young woman. Between the rich sound of the language and the rich colors of the carpets, it’s a book that is a treat for the senses. ©2006 Cooperative Children's Book Center