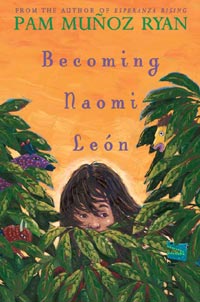 Naomi León likes order and predictability: Wednesday night chicken bake, Thursday night pork chops, Wheel of Fortune at 6:30 each evening. Most important, there is solid and predictable love that grounds her life with Gram and her younger brother, Owen. In a compelling story of identity and belonging, 11-year-old Naomi’s sense of order and security is threatened when the mother who abandoned her and Owen seven years before blows back into their lives. Skyla has no desire to reclaim Owen, who has struggled with physical problems much of his life. She only sees his imperfections, not his extraordinary resilience. But she wants Naomi to live with her, although her motives seem motivated more by money than love. Gram and neighbors Fabiola and Bernardo whisk Naomi and Owen to Oaxaca, Mexico, in the hopes of finding the children’s father on La Noche de la Rbanos, Night of the Radishes, the annual carving competition in which he is said to compete. Each chapter of Naomi’s story is titled for a different animal kingdom grouping: e.g., “a paddling of ducks,” “an exaltation of starlings.” On a story level, these titles reflect Naomi’s own passion for organizing and her interest in animals, which she frequently carves. But they also reflect the central theme of belonging as it plays out in the critical question of to whom Naomi belongs. Is it the great-grandmother who has raised and loved her, the unreliable mother who has suddenly reappeared, or the father she can barely remember and whose gift for carving she shares? As Naomi’s story unfolds, so, too, do many pictures of what a family can be: as tight-knit as Gram, Naomi and Owen or as expansive as the friends and relatives of friends who embrace and support them on their journey. ©2004 Cooperative Children's Book Center