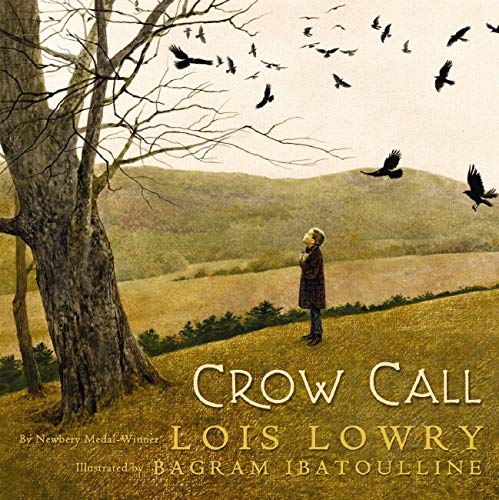 Set just after World War II, a young girl’s first hunting trip with her father is also a chance for the two of them to start to know each other again. “I sit shyly in the front seat of the car next to the stranger who is my father… Daddy. Daddy. Daddy. Saying it feels new… The war has lasted so long. He has been gone so long.” A stop at a diner for breakfast—two pieces of cherry pie—creates a private joke between them when the waitress mistakes her for a boy in her huge flannel shirt, braids tucked into the collar. But she’s nervous about hunting. Her father has put her in charge of the crow call, yet she doesn’t want him to kill the birds. And he doesn’t. Instead, the two spend a morning enjoying nature—including the frenzy of circling crows responding to her call—and one another’s company. Lois Lowry’s autobiographical tale includes a wonderful black-and-white picture of herself as a child, wearing the oversize flannel shirt she describes in the story. The muted, late-autumn palette of Bagram Ibatoulline’s illustrations conveys a sense of the past in a richly told story that will resonate for many contemporary children. ©2009 Cooperative Children's Book Center