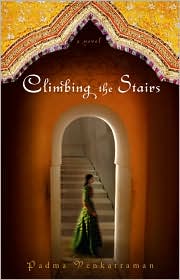 Vidya is a teenage girl in a progressive Brahmin family in India. Her father is a doctor involved in the protests for Indian independence from British rule and both her parents support Vidya’s plans to go to college. When her father is caught in a protest and viciously beaten senseless by police, Vidya and her family must move into the home of her grandfather and extended family, and the sphere of far more traditional Brahmin beliefs and practices. Under the instruction of her domineering oldest aunt, Vidya is prdered to spend her days after school providing childcare and spending mealtimes serving the men but not conversing with them. The men, her brother included, debate independence, nonviolence, and whether to fight with the British against the threat of Japanese invasion as World War II rages beyond their nation’s borders. Vidya finds refuge from the house’s oppression in the upstairs library and receives permission from her grandfather to spend time there reading. She also spends time conversing with Raman—a young man visiting the family—who seems to share and support her dreams of a university education, of nonviolence, of an independent country and life. Padma Venkatraman’s compelling debut novel is the story of a girl who finds her heart both broken and buoyed as she navigates personal tragedy and complex political and social times. ©2008 Cooperative Children’s Book Center