Stuntboy, in the Meantime 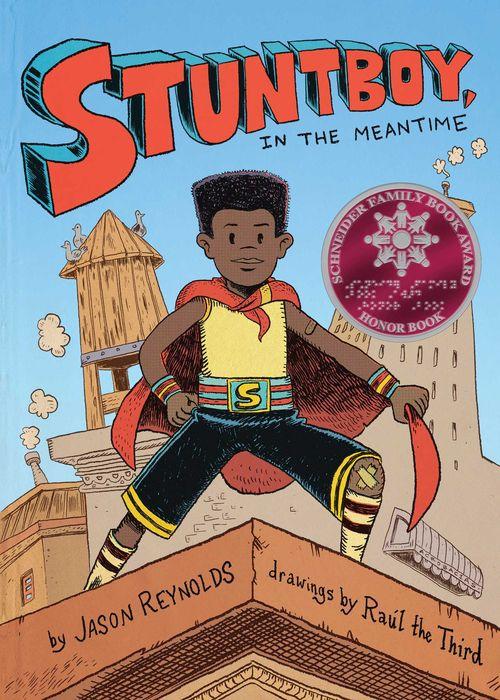 Portico Reeves, a ten-year-old Black boy, lives in a large apartment building that he likens to a castle, full of quirky characters he loves and appreciates. His best friend, Zola, lives there, too. Portico and Zola both love the same superhero television show, and Portico has a superhero alter ego, Stuntboy. His mission is to preserve the health and well-being of others in his building by performing stunts that either distract or diffuse a situation. For example, when he spots an elderly neighbor about to tumble down the stairs, Portico jumps in and takes the fall for him. Lately Portico’s parents have been arguing a lot over various possessions, and soon they’ll be moving into two different apartments, one upstairs and one down. Portico has anxiety, which he refers to as “the frets.” He’s a sensitive boy who worries a lot about others; he also trying to steer clear of a bully in the building, Hector Singletary the Worst. Portico’s superhero status is enhanced and enlarged by Raúl the Third’s comic-style illustrations which zigzag throughout nearly every page of the book. The over-the-top humor of the superhero story buzzes along on top of two more serious underlying subplots—Portico’s anxiety and his parents’ pending divorce—in an engaging story with a lot of heart. ©2022 Cooperative Children’s Book Center

Illustrated by Raul the Third