Spooked! How a Radio Broadcast and The War of the Worlds Sparked the 1938 Invasion of America 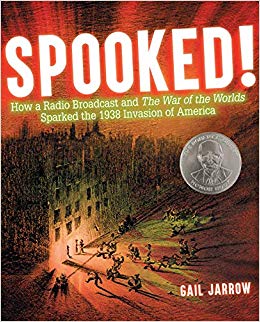 October 30, 1938: Listeners across the United States tuned in to the weekly Mercury Theater radio show, for which Wisconsin native Orson Welles and John Houseman chose books for adaption into 60-minute scripts complete with music, sound effects, and voice actors. This week, the book was H.G. Wells’s The War of the Worlds, a sci-fi novel about a Martian attack on Earth; the adaptation was set in New Jersey. Shortly after the broadcast began, it became apparent that a surprising number of listeners were mistaking the show for live news. Calls flooded the studio and came into police stations across the country as people believed the attack was real. Jarrow describes the development of the program that week before she moves rivetingly through the night’s broadcast, comparing real time to the condensed time that elapsed in the show, before exploring the aftermath, including the public’s highly varied and emotional response. She notes that it’s difficult to determine how widespread the panic actually was, because the mythology began almost immediately, fed by widespread coverage and first- person accounts of the event. With a design that expertly brings together the disparate elements of this event, this book examines the power of hoaxes (even unintentional ones), misinformation, and the media. A fascinating account that is also timely for today. ©2019 Cooperative Children’s Book Center