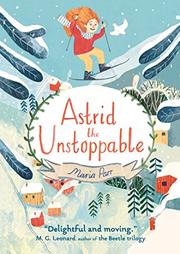 Astrid, the only child in her small Norwegian village, is known as “the little thunderbolt” for her fearless, full-speed-ahead approach to life. Her best friend is gruff Gunnvald, her aging godfather, who adores Astrid. The feeling is mutual. But a mysterious letter sends Gunnvald into a moody spiral, and then he breaks his leg. In the aftermath, Gunnvald’s adult daughter Heidi appears. Heidi is angry at her father, and he at her, for what they each see as abandonment by the other. Heidi’s mother left her with Gunnvald when she was four, returning eight years later to take her away. The pain of that separation is still raw and real for them both. Astrid is hurt and confused that Gunnvald could have abandoned his child—it’s clear that he never tried to contact Heidi after she left. And Astrid wants to hate Heidi for planning to sell Gunnvald’s farm to Klaus Hagen, owner of the local wellness retreat and hater of children in general and Astrid in particular. But she can’t ignore what she knows about Gunnvald, and what she learns about Heidi. So Astrid hatches a plan, and then another, in hopes of changing Heidi’s mind, and, eventually Gunnvald’s and Heidi’s hearts, in this funny and moving translated novel. ©2019 Cooperative Children’s Book Center

Translated by Guy Puzey. Translated from the Norwegian. Originally published in Norway.