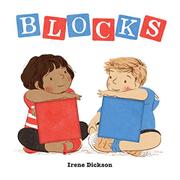 Two kids. Two sets of blocks. Two separate building projects. When Benji, who is building with blue blocks, wants one of Ruby’s red blocks, he takes it. She grabs it back. In the ensuing push and pull of “Mine!” they stumble and both of their towers come crashing down. “Uh-oh.” Momentary regret becomes shared opportunity as Ruby and Benji begin building with both red and blue blocks—together. A square, slightly oversized picture book unfolds in clean-lined, uncluttered, inviting mixed-media illustrations. A handful of well-chosen words pair with images that have much to notice, like the fact that Ruby’s clothes match the red blocks and Benji’s match the blue. At volume’s end they are joined by Gus, whose shirt and blocks are green. “What will they do now?” The answer in this picture book showing three racially diverse children is suggested on the closing endpapers. Isn’t cooperation grand? Highly Commended, 2017 Charlotte Zolotow Award ©2017 Cooperative Children’s Book Center