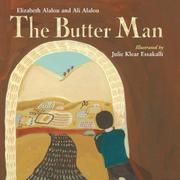 Too hungry to wait patiently for the couscous dinner to cook, Nora moans to her Baba that she’s “staaarving!” Her father got “the look he gets when he is thinking about tamazirt – that’s what Baba calls the place where he comes from, far away in Morocco.” Taking Nora on his knee, Baba shares the story of the butter man from his own childhood. After a season of drought and poor harvest, food became scarce in his home, and Ali’s father left to look for work across the mountains. Soon bread was the only thing left to eat, and the piece his mother gave him each day was smaller and harder than the piece on the day before. In an effort to distract Ali from his hunger, his mother suggested that he go outside and wait for the butter man. If the butter man passed by, Ali could ask for a bit of butter to spread on his bread. The butter man doesn’t pass by on that day, or any of the following days, but Ali is occupied by watching the villagers on the road, “forgetting for a while the gnawing feeling in [his] stomach.” Finally, one of the travelers on the road is his own father, returning from across the mountains and carrying vegetables and a piece of meat. Folk-art paintings show Nora and her Baba in their contemporary kitchen at the story’s opening and conclusion, and depict Ali and his parents, who are Muslim Berbers, in their Moroccan village. An author’s note and glossary provide additional information about the Berber people and life in the High Atlas Mountains of Morocco. Highly Commended, 2009 Charlotte Zolotow Award ©2008 Cooperative Children’s Book Center