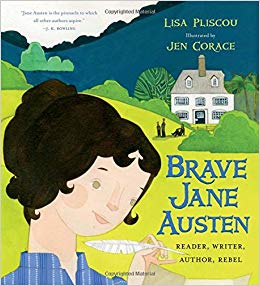 The challenges of poverty and sexism in Jane Austen’s childhood and young adulthood were countered by her early and ongoing exposure to stories, a powerful imagination, and her family’s support of her literary ambition. At a time when young women’s future goals were limited to marriage, Jane defied gender conventions both by writing books and populating them with entertaining characters that behaved badly. She turned down a marriage proposal that would have solved her financial worries, later stating that any type of lifestyle is better than “marrying without Affection.” Although only 41 when she died, Jane lived to see the publication and popularity of four of her books. End matter in this picture-book biography includes additional information about Jane Austen’s life, selected quotes from her letters, and a source list. ©2019 Cooperative Children’s Book Center