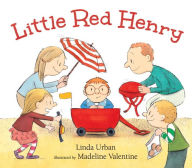 Little redheaded Henry is the youngest in his family. His mother, father, sister, and brother do everything for him. “Frankly, little redheaded Henry was sick of it.” Henry’s assertion of his independence (“I can do it myself,” he says time and time again. “And he did.”) plays out in a series of comical, over-the-top scenes that underscore the degree to which his family coddled him, from cutting his food and choosing his clothes to managing his playdates. As Henry asserts himself, his family is adrift. “Without Henry to do things for, they had no purpose.” With so much time on their hands, however, they can suddenly pursue new interests. And when bedtime comes, Henry realizes he isn’t quite ready to give up everything his family once did for him: “Could somebody please tuck me in?” Wonderful word choice and narrative flow, along with illustrations that extend both the humor and the warmth, make this picture book a delight. ©2015 Cooperative Children's Book Center