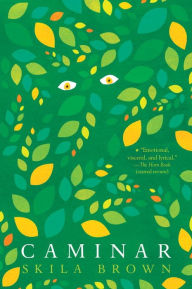 “She did not / sit down, did not / take more than two steps. Just / pointed her finger right to me, / “You / will / run.” A novel written in verse and set in 1981 during the Guatemalan civil war juxtaposes the beauty of the Guatemalan landscape and goodness of many of the country’s people with the brutality of war. Carlos obeys his mother when she tells him to run into the forest and hide when their village is attacked, promising to find him. But she never comes. On his own, Carlos heads up the mountain toward his grandmother’s village and meets four rebel soldiers who are lost in the forest Carlos knows so well. They tell Carlos that government soldiers attacked his village and massacred all the people. Devastated, Carlos begins to walk (caminar ) with the rebels, to help them find their way. He’s also determined to warn the people in the village where his grandmother lives about the soldiers. Once they arrive, he must make a choice: join the rebels, or stay in his grandmother’s village. There is strong sense of Carlos and his people's Mayan culture in a beautifully written book that deals with violent realities in a way that feels honest yet appropriate for young readers. ©2014 Cooperative Children's Book Center