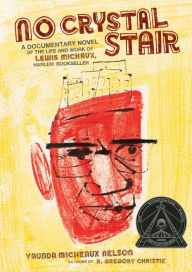 Lewis Michaux’s National Memorial African Bookstore in Harlem was a cultural, political, social, and literary epicenter for African Americans from the 1930s to the early 1970s. A fascinating narrative told in multiple voices and illustrated with photographs, newspaper articles and advertising, and even excerpts from the files kept on Michaux by the FBI, chronicle Michaux’s early life and young adulthood and the establishment of this extraordinary place where icons and everyday people found ideas, enrichment, conversation, community, and affirmation. Michaux believed that books change lives and author Vaunda Micheaux Nelson pays tribute to her great uncle’s vision with this artful, illuminating blend of fact and fiction in which lives--most real, a few imagined--are, indeed, changed profoundly, not just by books, but by the presence of this place where African Americans could gather and discuss literature, ideas, and politics; give voice to both their frustration and their dreams. While Lewis Michaux, a Black Nationalist, believed in books and political action, his older brother, Lightfoot, a minister, believed in prayer and the power of God, and the two very different paths the brothers walked makes for a fascinating contrast in this singular work. (MS) ©2012 Cooperative Children’s Book Center